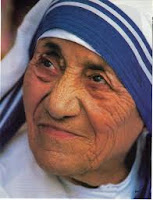 Women’s month. I think it is wonderful to have students research famous women for women’s month. To make the fourth grade Social Studies project more interesting, the teacher I substituted for wanted eight unique facts about each student’s researched famous woman displayed on paper filmstrip-type boxes. These paper “filmstrip” printouts looked like the old fashion filmstrips that used to be shown in theatres, remember those? I do.

The students had–supposedly–researched the eight facts and were ready to fill two of the eight filmstrip boxes. The idea was to write a fact in the top of the box and then draw a picture of the fact and color it. Simple, right? But as I circulated the room checking on progress and keeping students on task, I found that clarification was needed in several cases.

To keep this post length reasonable, I’ll speak about one particular student’s famous woman, as it sticks in my mind so. Mother Teresa. What was the fourth grade student’s amazing fact about her? Mother Teresa gave chocolate to the poor kids.

…Chocolate…why did it have to be chocolate, and why now?

“No, Sweetie,” I informed my brilliant fourth grader, “Mother Teresa would not give chocolate–especially the large chocolate candy bar you have pictured in your film box–to poor children. These people are starving. Chocolate is a luxury. Mother Teresa would have given them something a little more nutritious. Probably a basic food, usually a thick liquid served in a bowl.”

The fourth grade wizard thought for a moment. “You mean chocolate syrup over ice cream?” She offered.

What’s with this girl and chocolate, I thought.

“This isn’t working,” I told her. “Give me another fact that makes Mother Teresa an important woman.”

“She got a prize,” the young lady told me.

“What was the prize,” I asked.

“Chocolate,” she told me with an angelic face.

Okay, God, you are testing me, right?

“Dear,” I told her, “I gave up chocolate for Lent. Could we not use the “C” word anymore?”

“Good,” I said. “Then I’ll tell you what prize Mother Teresa received. It was the Nobel Peace Prize for her good works taking care of the poor in India.”

“Did she have chocolate at the party?” the fourth grader asked me.

I just shook my head and moved onto the next student. It’s going to be another long, long, long Lent. Wish me luck.